Capital Market Union: Do We Need One?

Notwithstanding years of harmonising regulation and a common currency for most EU member states, capital market is still fragmented, integration often rests on a vertical base, few EU-wide structures have emerged in the last decade and the most powerful intermediaries are often of US parentage. Europe has struggled for decades to create a decent capital market, heavily relying on bank financing, and the financial crisis has retrenched and re-fragmented the landscape.

The proposal for CMU can be analysed through different lenses, justifying its rationale.
First and foremost, the allocation of resources in the actual structure of the EU is over-relying on bank loans. While retail banks have a better knowledge of local situation, often providing more information to investors and borrowers, bank funding is not always the most efficient way for dynamic and highly growing enterprise to fund themselves. Moreover, due to the increased capital requirement for banks after the financial crisis and the difficulties encountered by some banks regarding their balance-sheets and the bias over sovereign bonds of their home country, financing opportunities have decreased.

National fragmentation and the bias for national portfolios reduce the opportunities for cross-border funding, complicating the way investors and borrowers can meet their needs.

Finally – especially valuable for the Eurozone – enhanced financial integration act as a private risk-sharing mechanism, spreading the risk inherent in investment on a cross-national field, thus reducing the risk of asymmetric shocks in the area and fostering the resilience of the block. This consideration is even more important considering the lack of political will to establish a public shock absorption mechanism – as for instance proposed in the Five President Report (Juncker, Tusk, Dijsselbloem, Draghi, & Schulz, 2015). Ã‚Â Ã‚Â Ã‚Â Ã‚Â Ã‚Â Ã‚Â Ã‚Â Ã‚Â Ã‚Â Ã‚Â Ã‚Â Ã‚Â Ã‚Â
Moreover, numerous forms of financing and better allocation of resources within the Eurozone foster the transmission channel of monetary policy, enhancing the ability of the ECB to meet its targets (ECB 2012).

The natural benchmark for capital markets is the US. Comparisons can be made at the EU level, but once we consider the country specificity we have an even more complex landscape. In fact big differences remain between national markets, mostly of a structural nature.

When the CMU action plan was presented, although US and EU economies have roughly the same size, US venture capital market is five times EU’s one and US equity markets are twice the EU ones in term of capitalization.

Europe has a universal banking landscape with large banks covering commercial and investment activities. While in the US 80% of corporate debt financing depends on capital markets, in the EU 90% depends on bank financing. Such dependence made the European economy vulnerable when banking conditions tightened in a number of member States during and following the international financial crisis. 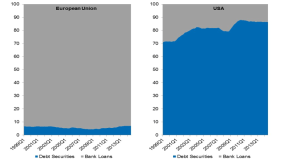 Moreover, the financial crisis had a considerable negative impact on securitization issuance in Europe, dropping from 594 billion euro at the end of 2007 to 216 billion in 2014 (on the rise since 2011). Finally, international capital requirement and EU banking regulation changes during the crisis impacted bank lending.

Other than having a different system to the one of the US on aggregate, within the EU there is also great variation on the depth and development of capital markets nationally. 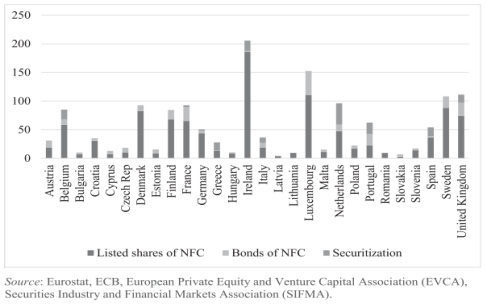 Only 9 Member states have non-banking financial intermediation above 50% of GDP. Divergence can be seen also in the stock market capitalization of different member states as a percentage of GDP. 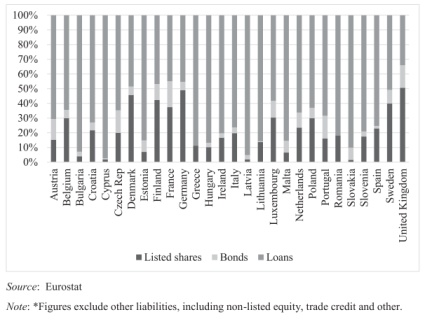 In the EU there are actually 28 different codes of tax, company and insolvency law that transnational investors have to deal with, blocking the smooth flow of capital between member states.Ã‚Â Ã‚Â Ã‚Â Ã‚Â Ã‚Â Ã‚Â Ã‚Â Ã‚Â Ã‚Â Ã‚Â Ã‚Â Ã‚Â Ã‚Â
Taking the example of bankruptcy law, different traditions and level of protections for investors are in place in member states. As Jey Westbrook, emeritus director of the International Insolvency Institute highlighted, “The Brits have always had a more sympathetic idea to saving a debtor in trouble,” Westbrook said. “The Germans have had a much stricter view: There remains a big bias in favour of the idea that ‘the management of this company screwed up, they’re losers, they probably did something fraudulent, the company should be bankrupt and pay the creditors as best they can, and the management should go join a monastery,’ so to speak. And then you have French law, which is somewhere in between but has much more emphasis on protecting employees and protecting jobs.”.

The creation of truly European-wide securities moreover runs into the quest for harmonisation. Creating a security for home-mortgages, for example, requires that repossession laws in member states is to a certain degree homogeneous, same as the length of time spent in court to enforce a contract. Data from the World Bank doing Business indicators show that litigation in court in countries like Italy and Greece can take up to three times the time spent in court in the Netherlands or Sweden. Banks normally bundle securities together into homogeneous groups (in our case Dutch mortgages packed together and Greek ones in a different securities). Moving to a single market for capital would require further harmonisation in national law in order to overcome national bias.

Other than the action plan on CMU the commission also presented two directives on securitization: the first building blocks of CMU.

These broad goals are not fully operationalised and from the text there seems to be some inconsistencies. While the proposed approach is bottom-up, removing barriers when encountered, the Commission action aims at harmonising practices while possibly (as stated in the 5 Presidents Report) central supervision.

While aiming at promoting investments in Europe, Giovannini et al. (2015) argue that it is not clear what are the causes of low investments in Europe, whether it depends on fragmented financial systems or if it is due to a low demand for capital. This means that the presumed effect of the CMU cannot be yet fully quantified.

In order to strengthen cross-border transaction one of the most pressing issue is to improve the quality of information flow in order to establish market mechanism. This would require actions to increase the quality and harmonization of company data across Europe, including accounting standards, credit information and ownership.

Considering the legislative outcomes so far, the CMU project has relied mainly on technical adjustments on existing legislation, creating new layers in order to arrive at a European-wide rulebook. The reformed prospectus directive, combined with the agreement of banks all over the continent to give feedbacks to firms in the case funds are not granted is a positive step forward. SMEs, having feedbacks on the best way to raise money will now be able to more easily access capital market due to the more limited fixed costs related to it.

On a side note, the effect of Brexit has a huge weight in the future of CMU, being London the most important financial hub in the continent. Brexit offers however also the opportunity to revise the governance system of the CMU, proposing the stepping up of ESMA competencies in supervising European instruments. The UK was against further centralisation of competencies at the EU level, but now such a possibility should be taken into consideration, in order to strengthen the common supervision same as happened within the framework of the Banking union.

‘A New Start for Europe: My Agenda for Jobs, Growth, Fairness and Democratic Change’, http://ec.europa.eu/about/juncker-commission/docs/pg_en.pdf

Chaired by the British Johnathan Hill and lately by Dombrovsksis after the Brexit vote.

Council Directive 93/22/EEC of 10 May 1993 on investment services in the securities field.

Historically in the USA from 1933 with the Glass-Steagall Act commercial and investment banking were separated until 1991, fostering a deepening of capital market financing in the country.