Desire to lead and good judgment

According to many theories and best practices, leadership extensively affects the organisational performance. Moreover, many studies suggest that leadership is either a trait (e.g. Stogdill, 1974) or driven by behaviour ( e.g. Shamir and Howell, 1999). In our assessment of Krantz’s leadership role

In Apollo 13, elements of traits related to leadership was included and strongly demonstrated by Krantz with a compelling vision and strong culture. This included seven values: drive, desire to lead, honesty and integrity, emotional maturity, and intelligence. However, integrity was found to be a superordinate value without having the other values far less significance. Given the stress and contiguity of the Apollo 13 crisis, it is noticeable that the traits of a true leader differ depending on time and context. (Ahn, Ettner, and Loupin, 2012)

Krantz was perceived as highly driven and capable of prioritising and communicating issues and needs during unsettled situations as he provided guidance and psychological safety for his team members. (McDermott, Kidney, and Flood, 2011). He was also directing the actions of the team towards a specific goal of getting the astronauts safely home.

Desire to lead and good judgment

Krantz has a distinctive desire to lead with effective decision making which was far more about accumulated wisdom he had but more of him building an open environment with openness, accountability and honesty (Sonnefield, 2002)

Integrity can be explained as the unwavering devotion to a specific ethical or moral value. (Ahn, Ettner, and Loupin, 2012). The significance of integrity of Krantz towards the Apollo 13 crisis was essential even when the team was devastated he ensured that all obligations are met to work on the astronauts’ safe journey home.

It is the leader’s awareness of his/her inner-competencies. This includes self- assurance and self-esteem that s/he can make a difference. This allows the leader to influence others effectively in the appropriate and right ways. This characteristic affects attitudes; tendencies and emotional influence to others. (Belasen and Frank, 2008)

Again, Krantz was a very self-confident leader. When he described that they will not fail in bringing the astronauts safely back home although his team thought it was impossible. But he never doubted that the mission will be accomplished successfully, and despite the resistance of many team members, he did things the way he thought best.

Krantz’s emotional intelligence had a great impact for his leadership role. According to ( Mayer and Salovey,1997) it is the skill to connect or disconnect from emotions relying on the efficiency of emotions in a specific situation. And Krantz demonstrated that clearly by engaging in his self- reflection which enabled him to contribute to a stronger sense of self identity and understanding his team and their actions. (McDermott, Kidney, and Flood, 2011)

Gene Krantz is an intellectual leader but his IQ was not higher than his followers. But he had strong perceptional, reasoning and verbal abilities which lead to a productive outcome as he didn’t have any difficulties communicating with his subordinates.

Not only Krantz – the engineer -had the job related knowledge as he was a flight director for many years, but also the ability to learn from his subordinate’s experiences and applied that learning to new and different situation. He was able to derive meaning from all kinds of experience in the NASA team with his learning agility -which is different from basic intellect- according to the changing circumstances during the crisis. (Povah, 2012b)

A sense of urgency was clearly identified by Krantz during the Apollo 13 crisis which gave the capacity to impart an action- orientation towards achieving results. He has the desire to get the job done as he was persistent and dominant. He battled against pessimism and focused on solving the problem despite all obstacles faced them. He was proactive with his team but still directing his team to achieve the goal.

The leadership Style Krantz used was more Democratic rather than Autocratic or Laissez-Faire Style. He listened to his team and encouraged different point of views. However, there was a time limitation to do more analysis.

Krantz pulled one flight control team out of its normal role to work on solutions for the crisis. He moved staff from team to team to bring specific skills, knowledge and expertise. He kept directing them towards the goal as his leadership was the key factor of successfully accomplish the mission although it was considered the successful failure.

One of the most well-known approaches to leadership “The Managerial Grid” developed by Robert Blake and Jane Mouton (1964) was used to analyse the leadership style of Krantz. He had to achieve the goal of getting the astronauts safely back home (Task) and at the same time, manage his team (People). His main concern was to ensure that his subordinates get the job done without failure based on obedience, trust, respect and support. His team was responding with involvement and enthusiasm. Using the grid which forms a matrix of possible leadership styles to analyse how he used his skills and intelligence in working with and through other people for results as shown in Figure 1. (Sui Pheng and Lee, 1997) 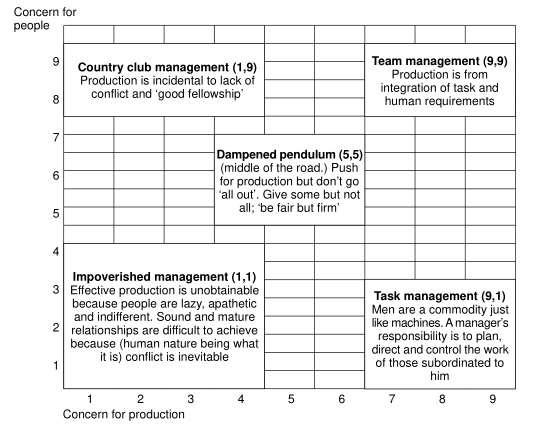 According to the managerial Grid,Â  Krantz was an effective team leader. He was contributing to the crisis and committed to getting the job done. Although he was concerned about the result of getting astronauts back home and pushed his subordinates to the limit, he was motivating the team while empowering them with trust, respect and commitment. This sound leadership style is also inspired by the McGregor Y theory.

Apollo 13 movie told the story of a crisis that could have ended tragically. It required transformational leaders to articulate a clear vision that would allow the constituents to take on leadership roles based on their experiences, needs, values, morale and strengths. Through innovation and creative problem solving they were able to collaboratively work towards their new vision to getting the astronauts home safely. This was successfully achieved as the leaders used idealised influence, inspirational motivation, intellectual stimulation and individual consideration to lead constituents through this catastrophe.

In summary, this report reflects the leadership demonstrated in Apollo 13 using many leadership theories. Our use of the Leadership Trait Theory, Situational Leadership and leadership grid provided a more behaviour- specific focus on interpersonal skills concepts. Second, we analysed the different leaders____ and finallyâ€¦..