Abstract: -The cloud storage services are used to store intermediate and persistent data generated from various resources including servers and IoT based networks. The outcome of such developments is that the data gets duplicated and gets replicated rapidly especially when large numbers of cloud users are working in a collaborative environment to solve large scale problems in geo-distributed networks. The data gets prone to breach of privacy and high incidence of duplication of data. When the dynamics of cloud services change over period of time, the ownership and proof of identity operations also need to change and work dynamically for high degree of security. In this work we will study the concepts; methods and the schemes that can make the cloud services secure and reduce the incident of data duplication with use of cryptography mathematics and increase potential storage capacity. The purposed scheme works for deduplication of data with arithmetic key validity operations that reduce the overhead and increase the complexity of the keys so that it is hard to break the keys.

Organizations that focus on providing online storage with strong emphasizes on the security of data based on double encryption [1] (256 bit AES or 448 bit), managed along with fish key algorithm and SSL encryption [2] based connections are in great demand. These organizations need to maintain large size data centers that have a temperature control mechanism, power backups are seismic bracing and other safeguards. But all these safeguards, monitoring and mechanism becomes expensive, if they do not take care of data duplication issues and problems related to data reduction. Data Deduplication [3] occurs especially when the setup is multi-users and the users are collaborating with each other’s work objects such as document files, video, cloud computation services and privileges etc. and volume of data grows expensively.

Â Â Â Â Â Â  In a distributed database management systems special care is taken to avoid duplication of data either by minimizing the number of writes for saving I/O bandwidth or de normalization. Databases use the concept of locking to avoid ownership issues, access conflicts and duplication issues. But even as disk storage capacities continue to increase and are becoming more cheaper, the demand for online storage has also increased many folds. Hence, the cloud service providers (CSP) continue to seek methods to reduce cost of DE-duplication and increase the potential capacity of the disk with better data management techniques. The data managers may use either compression or deduplication methods to achieve this business goal. In broad terms these technologies can be classified as data reduction techniques. The end customers are able to effectively store more data than the overall capacity of their disk storage system would allow. For example a customer has 20 TB storage array the customer may bet benefit of 5:1 which means theoretically 5 times the current storage can be availed. [(5*20 TB) = 100 TB]. The next section defines and discussed data reduction methods and issues of ownership to build trustful online storage services. 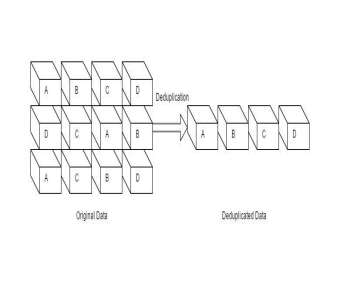 The next section defines and discussed data reduction methods and issues of ownership to build trustful online storage services.

The purpose is to obtain a reducedrepresentation of a data set file that much smaller in volume yet provide same configure even, if the modified data in a collaborative environment. The reduced representation does not necessarily means a reduction in size of the data, but reduction in unwanted data or duplicates the existence of the data entities. In simple words the data reduction process would retain only one copy of the data and keep pointers to the unique copy if duplicates are found. Hence data storage is reduced.

Compression [4]: – It is a useful data reduction method as it helps to reduce the overall resources required to store and transmit data over network medium. However, computational resources are required for data reduction method. Such overhead can easily be offset due to the benefit it offers due to compression. However, an subject to the space time complexity trade off; for example, a video compression may require expensive investment in hardware for its compression-decompression and viewing cycle, but it may help to reduce space requirements in case there is need to achieve the video.

Deduplication [3]: – Deduplication is processed typically consist of steps that divide the data into data sets of smaller chunk sizes and use an algorithm to allocate each data block a unique hash code. In this, the deduplication process further find similarities between the previously stored hash codes to determine if the data block is already in the storage medium. Few methods use the concept comparing back up to the previous data chunks at bit level for removing obsolete data. Prominent works done in this area as follows:

Before we engross further into this topic, let us understand the basic terms involved in the DE duplication process having in built securely features. 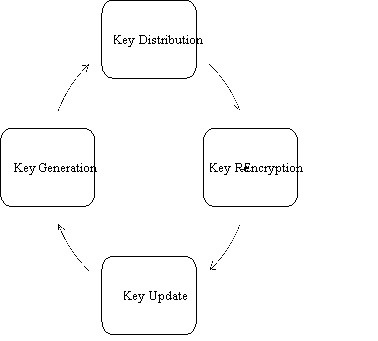 Improvements in arithmetic validity test can be done to improve the validation process, especially in concept of DE duplication area; where the message to be encrypted in data chunks and need to arithmetic validation and proof of ownership is to be done multiple times due to the collaborative nature of the data object. Most of the arithmetic tests validity are based on the generation and selection of prime numbers. It was in late 1989’s many people came up with an idea of solving key distribution problem for exchanging information publicly with a use of a shared or a secret cipher without someone else being able to compute the secret value. The most widely used algorithms “DiffieHellman key exchange” takes advantage of prime number series. The mathematics of prime numbers (integer whole numbers) shows that the modulus of prime numbers is useful for cryptography. The Example [Table no. 1] clearly illustrates the prime number values gets the systematically bigger and bigger, is very useful for cryptography as it has the scrambling impact. For example: –

Prime Numbers in Cryptography and Deduplication: Prime numbers [13] are whole numbers integers that have either factors 1 or same factor as itself. They are helpful in choosing disjoint sets of random numbers that do not have any common factors. With use of modular arithmetic certain large computations can be done easily with reduced number of steps. It states that remainder always remain less than divider, for example, 39 modulo 8, which is calculated as 39/7 (= 4 7/8) and take the remainder. In this case, 8 divides into 39 with a remainder of 7. Thus, 39 modulo 8 = 7. Note that the remainder (when dividing by 8) is always less than 8. Table [1] give more examples and pattern due this arithmetic.

To do modular addition [14], two numbers are added normally, then divided by the modulus and get the remainder. Thus, (17+20) mod 7 = (37) mod 7 = 2.Â  The next section illustrates, how these computations are employed for cryptographic key exchange with typical example of Alice, Bod and Eva as actors in a typical scenario of keys exchange for authentication.

Then, the first person calculates ‘Z’ using equation no. 1

And sends C to Sender (first person). Note that Hacker (third person) might have both Y and C.

Step 3: Now, Sender takes the values of C, and calculate using equation no. 3

Thus, without knowing Receiver’s secret exponent, B, sender was able to calculate YAB (mod X). With this value as a key, Sender and Receiver can now start working together. But Hacker may break into the code of the communication channel by computing Y, X, Z & C just like Sender and Receiver. Experimental results in cryptography, show that it ultimately becomes a discrete algorithm problem and consequently Hacker fails to breaks the code.

The Hacker does not have any proper way to get value. This is because the value is huge, but the question is how did sender and receiver computed such a large value, it is because of modulus arithmetic. They were working on the modulus of ‘P’ and using a shortcut method called repeated squaring method. The problem of finding match to break the code for the hacker becomes a problem of discrete algorithm problem. [15]

From the above mention in this paper, it can be deduced that the athematic validity part of the security algorithm computations can also be improved by reducing number of computational steps. For this purpose Vedic mathematical methods such as [17], especially where the resources (memory to store and compute) keys are constrained.

Life Cycle of Data and Deduplication:Â  The life cycle of digital material is normally prove to change from technological and business processes throughout their lifecycle. Reliable re-use of this digital material, is only possible. If the curation, archiving and storage systems are well-defined and functioning with minimum resource to maximum returns. Hence, control to these events in the Life Cycle is Deduplication process and securely of data. 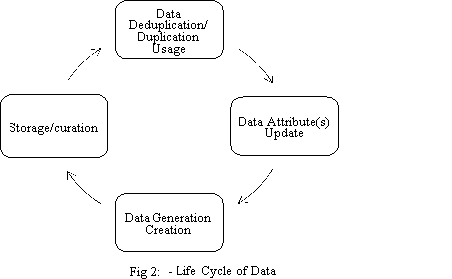 In this paper, sections have been dedicated to the discussion on the values concepts that need to be understood to overcome the challenges in De-duplication algorithms implementations. It was found that at each level of duplication process (file and block) there is a needs for keys to be arithmetically valid and there ownership also need proved for proper working of a secure duplication system. The process becomes prone to attacks, when the process is applied in geo-distributed storage architecture.Â  The complexity for cheating ownership verification is at least difficult as performing strong collision attack of the hash function due to these mathematical functions.Â  Finding the discrete algorithm of a random elliptic curve element with respect to a publicly known base point is infeasible this is (ECDLP). The security of the elliptic curve cryptography depends on the ability to the compute a point multiplication and the mobility to compute the multiple given the original and product points. The size of the elliptic curve determines the difficulty of the problem.

As discussed, in the section mathematical methods such as Nikhilam Sutra, Karatsuba Algorithm [27] may be used for doing computations related to arithmetic validity of the keys produced for security purpose as it involves easier steps and reduce the number of bits required for doing multiplication operations etc. Other than this, the future research work to apply to security network need of sensors that have low memory and computational power to run expensive cryptography operations such public key validation and key exchange thereafter.