Proper business modelling requires in depth analysis of the business conditions that affect the performance of the business enterprise. This analysis must be objective and very informing in terms of highlighting the prospects of business growth and forecasting the position of the business by using the current growth opportunities and strengths too. A growth oriented business franchise must take into account the four facets involved in the SWOT criteria, critically analyse them and establish a framework for propagating growth through the inferences of SWOT criterion.

ExxonMobil, being a multinational oil company with immense business interests has plenty of business variables that directly stand on its way to greater growth. Conversely, the business has humongous opportunities and cardinal pillars on which it stands to inspire its growth in the industry. This report is tasked with the examination of these key factors and opportunities of growth and offer the recommendations to capitalize on these factors in order of importance. In contrast,the report shall examine the threats and weaknesses of these variables with a view of turning them into opportunities for the business.

The growth of a Company depends on its successfule formulation and implemtation of strategy. Formulation of strategy cmusttake heed of the envinromental forces impacting on he organisation. This paper analyses ExxonMobil Oil Company position in its operatig markets and through a careful analysis of Strenght, Weaknesses pportunities and threats. The comapnuy operates in the oil sector and as such the companyâ€™s strategy has a long term focus, heavy fixed costs, low margins and huge economies of scale.

The company has experienced consistent grwth in sales and profitability. The present strategy is based on cutting edge research and development to develop upstream units coupled with an efficient system of distribution structured to reduce costs. The companyalso emphasises on superior customer service to maintain customer loyalty. Competition in the oil sector is ntense and as such firms rely on customer loyaty to bind customers to their products. Griven that the company operates in an iduusry where several players sell perfectly substitutable products, each of the players invests in quality and customer service to driv profitability (Andersen 2009).

The industry is characterised by huge fixed costs and thin operating margins. Thus, firms have to sel excessive quantities of poduce to break even. Profitabiliy therefore relies on economies of scale. Besides, environmental concersn have a huge impact on the firmâ€™s profitability. Mistakes in production can result in huge oil spills and resultant fins bythe authorities. Extreme violations of the operationsl codes can result in denial of operating licence.

ExxonMobil has two main operating segments namely upstream and downstream. Upstream operation include all activities involved in exploration, driigng and pumpting fossil fuels from beneath to the surface for onward processing. Downsteam operatios involve the processing distribution and marketing of hydrcarbons. The company was formed in 1999 and hasrealised consistent growth in sales and profitability to become on e of the largest producers in the word. The compsny now handleds 3% of global energy output. The company is aslo the second largest (by market capitalisation) listed firm in in the US (Vassilou,2009). The company has capacity to produce 6.5 million barrels of crude daily, a relativey huge amount relative to the other players in the industry. The ccompany has operations in more than 100 countries under its various brands and has 37 refineries (Exxon, 2007). The firmâ€™s annual growth in capacity stands at 17% and has enough resources to invest in efficient production (Exxon, 2009).

ExxonMobil has a strict staffing policy throughout its operational divisions. The firm has a favoured brand name that allows it to attract talented employees. This offers the comaony an edge against the competition (Exxon Company 2007). The firmâ€™s is to hire highly motivated and skilledstaff to drive its strategy (Exxon Company 2009).

Berberoglu (2008) explains that ExxonMobil has an organisation structure s that is fashioned along the concept of autonomous gobal operaitons. The company has eleven (11) separate divisions each operating globally. These divisions are organied in a manner that they offer the much needed synergy in the business. The global merger of the former 2 energy giants Exxon and Mobil offers the company expanded reach in markets, global playing field in terms of resources and a harmonised pool of human resources with differtnt abilities and orientation to drive the mered entityâ€™s strategy.

Following the merger, the firms combined upstream companies were moved to Houston where a significant amount of the companyâ€™s upstream businesses are located. These includes functions such as esearch and development, exploration drilling and production. Downstream operations weremoved to Virginia including such functions as marketing, engineering research, production of lubricants etc (McLeish 2008). 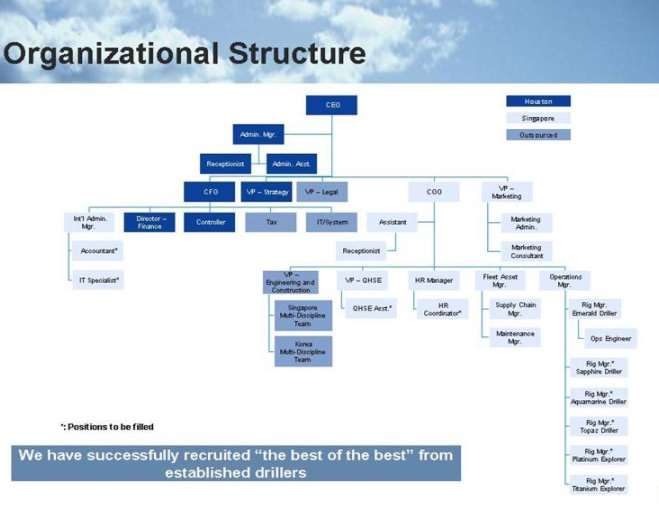 This paper builds a case of trategic orientation of the company based on the findings of the SWOT matrix. The paper utilises interpretative analysis to determine the firmâ€™s competitive strengths and weaknesses as well as its weakmesses and strengths. The following is the firmâ€™s Swot matrix.

Being a private company, ExxonMobil the government has minimal governeent control. It is therefore driven by the key aims of profits as opposed to stateâ€™s social interests. It therefore suffers form minimal state interference experienced by the National Oil Companies. NOCs suffer from extreme redtape and subversion of profitable causes in the interests of state (Omeje 2008).

The company has minimal violations of environemental code of condust as laid down by the varous environmental agencies in its various operating markets. However, concerns over global warming have resulted in the increased scrutiny of its producton oerations especially deep sea drilling and emissions. This presents the company with no immediate operatonal problems.

The company has a strong asset base. This is crcuail in the industry owing to the high fixed operational costs experienced in the sector. The company reinvest an average of 16% of its revenue in its opreations to boost capacity its capacity for research and development and output. Thefirm has the capacity to acquire promising business operational units to grow its business.

Human resource offers firms the most potent form of competitive advantage. The company attracts huge talent of labour force due to its sting brand and reputation as a good employer. This offers the company ability to execute its strategy.

The companyâ€™s 1989 Alaska oil spill and its sponsorship of research pubications hurt the firmâ€™s image and resulted in numerous law suits and other contingent liabilities that could cost the firm billions in claims. The companyâ€™s sales experienced a dip following concerns of irresponsibility. The oil spill also pushed the firms operational costsup by 11%. This led to the companyâ€™s adoption of new, more expensive technologies to gaud against such violations (Porter 2008). These measures continue to ngatively impact the firms profitability.

Following the firm has aging oil wells and its new oil finds are deeper and moer expensive to drill (ExxonMobil, 2009). This means that the per unit production costcontinues to rise over even as other costs such asmarketing and distribution rise (Vassiliou 2009). While rising nergy prices have largely compensated for the rising production costs,increased regulatory costs and taxes have offset such gains.

The iniial cost of production is very high. Exploration, drilling and maintenance of oil wells makes firmâ€™s incur excessive costs. The company has to recoup the high costs by operating in large scale. The firm cannot sell at high prices due to competition and thherfore it has to rely on economies of scale to driv its profitability. High fixed costs mean that the company experincesa disproportionate fall in profits if sales decline (Porter 2011).

Despite the firmâ€™s prefeed position as an employer, there is a shortage ofquaified talent in selected areas that are critical to firmâ€™s productivity. Most of the firmâ€™s new hires require excessive training to orient the to the training environement (Mondy, Noe & Gowan 2005).

The company has a comprehensive strategy of buying promising business ventures. These venetures not only have the potential to add value but also enable it capture key markets and customer groups. The company has a high capital base and other resources that enable can enable it undertake mergers and acquisitions without having to extert unnecessary pressure on existing business.

The company has the capability to ensure environmental safety through safer, more technologically advanced operations. The company has necessary technology to find oil in previously impossible conditions and bring it to the surface at significantly lower cost.

Shale Gas drilling (called fracking) promises to transform the fortunes of the company. Shaleis cheaper and easier to explore than conventional fossil fuels.

The company enjoys goodwill among proffessionals due to its preferred emplotyer status. Besides, the company has operations spanning various markets makimg the company access variously talented and diverse talent groups.

Global concerns of a warming planet put the continued reliance on fossil fuels in doubt in the long term. The companyâ€™s investment in other renewable energy sources that pose no threat to the envieoentmen are yet to bear fruits.

Labor laws in is key perating markets are extremely restrictive. Besides, employees have protective labor unions that make it hard to implement policies.

Changes in political leadership can have maret impact on the firmâ€™s operations. For instance, a change of fgovernement in the US can result in denial of licences to drill in offshore areas where the company pderives significant oil deposits. (Reinecke & Strobenreuther 2008; Mondi & Gowan, 2005; Powel, 2013).

The firmâ€™s costs of operation are likely to rise as the effect of global warming take their toll. This will be more pronounced especially in the low-lying areas where the firms drilling operations are more exposed to extreme weather (Environment, 2012; Coll 2012; Vernon, 2012; Prahalad & Hamel 2010; Smith 2012).

The energy industry depends heavily on technological advancements to drive production and efficiency (Powel, 2013). There is a real possibility that competing firms can strike low cost deposits and sell at a lower price effectively driving the firm from its market leadership position. See the statistical comparison below 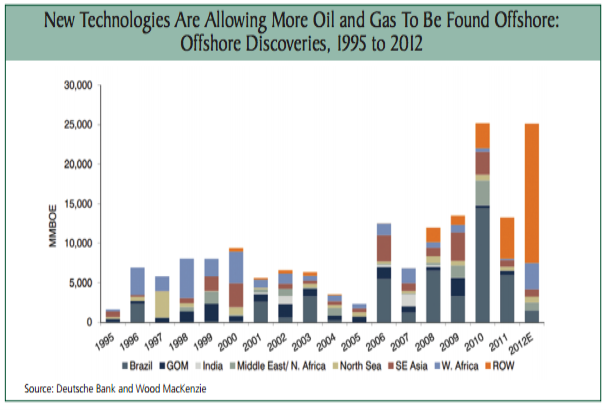 SWOT analysis helps indicate the firmâ€™s state of operation. Once a firm identifies tee variables under SWOT, the next step is to take advantage of its strengths to overcome its weaknesses and to take advantage of opportunities. This positions the firm at a point of competitive advantage.

Shortfalls of the SWOT analysis

SWOT analysis does not prioritize the competing opportunities making it hard to pick the most appropriate (Ringland, 2014). This makes it ineffective for analysis. In addition to lack of prioritization, SWOT does not offer solutions or alternatives to the firmâ€™s weaknesses and threats. The general rule of thumb is to use the companyâ€™s strength to counter threats and exploit opportunities. However, without prioritization, it is difficult to know the threats to tackle or opportunities to exploit first.

Sampson, A 2009, The seven sisters: the great oil companies and the world they shaped, Viking Press, New York.