Economic Impacts of Smuggling in Pakistan

Smuggling basically refers to the transfer of goods illegally from one place to another. It is an activity which consists of the importation or exportation of goods or living beings by wrong or unlawful means with the objective of evading taxes. It is illegal methods of conducting business and is done secretly. The principle causes of smuggling are greed for wealth ignorance and lack of nationalism or patriotism. 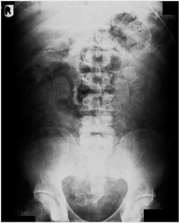 Ã‚Â  X-ray of an abdomen piled up with cocaine

The objective of this report is to look at the economic impacts of smuggling in Pakistan. There are various motivations to smuggle in this country. These include the participation in illegal activities, such as, drug trade, illegal weapons trade, exotic wildlife trade, illegal immigration or illegal emigration, tax evasion, providing contraband to a prison inmate, or the theft of the items being smuggled.

The main objectives are:

The scope of the research is how can we get awareness about these types of illegal trade of goods in Pakistan, identify key dynamics and provide policy and program recommendations for that. However it is difficult to determine due to lack of reliable data but we can try our level best through discussing about these types of illegal economy of Pakistan and offer long-term solutions that how can we safe our economy from these illegal trade of goods to support Pakistan.

This report attempts to map out the proceeds from: 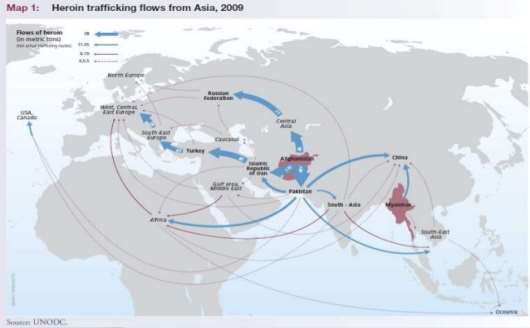 These crimes are based on their contribution towards global, rational, regional risks. This study focus upon government policies towards illegal economy through group discussion. In past Pakistan faced difficulties because of smuggling. Smuggling demolished our economy so many times in multidimensional way. It undermines the local industries and decreases the volume of earnings and revenue which is collected from duties and service sectors. The volume of informal economy is raised up to 50 to 60% of the formal economy. Revenue loss on account of smuggling as estimated by the World Bank, amounted to US 35$ billion during nine years (2000-2009).

Pak-Afghan border is the main problem. People living in Chaman didn’t need visas to cross the border. They run the business on both sides as well as marriages. Goods up to 5 to 6 billion dollars were smuggled from Afghanistan to Pakistan through trade route especially dry fruits. Afghanistan also imports goods illegally from Pakistan such as milk, juices and other machinery items etc.

Many of Pakhtoons have relatives on both sides. Afghans went to Pakistan for medical checkup, family functions and for business etc.But suddenly the travelling between two countries stopped. Pakistan has announced that for security reasons only Afghans with proper documents will be allowed to cross the border. Up to 25000 people use to cross border every day. One day 1 of the new policy thousands of people were facing problem in travelling from Afghanistan to Pakistan. Pushtoons with families across the border are worry about this situation. Afghan transit trade becomes a biggest source of smuggling. On the period of 2008-2010 the revenue loss is about 2.5 to 3 billion which are estimated annually during this period.

Pakistanis entered the UK illegally and still continue for earning money. Around 430,000 Pakistanis live in UK. Due to the illegal migration, many Pakistanis were imprisoned in foreign jails. Beside these issues, there was an issue about tobacco control in Pakistan. Taxes on tobacco were increased due to which prices of cigarette were increased by 10%. Therefore, the demand for cigarette has reduced by 11.7%. The volume of smuggling is 18 billion Pakistani Rupees in cigarette and other tobacco products.

This situation is getting worse day by day. According to a survey in 2013, the smuggling in electronics has increased drastically. Each day thousands of cellphones and laptops are being shipped or imported in Pakistan alone in electronic markets illegally. Another research in this regard revealed that smuggler crosses Wahga border which has been opened by the president regime which would result in a huge chunk of Indian goods destined for Afghanistan would ultimately land in our domestic market which would destroy the national economy. They uses Pak-Iran border and Pak-Afghan border along with the coastal areas of Baluchistan to smuggle these goods to various parts of the country.

This situation is very serious for the economy of Pakistan as these factors have great impact on any economy. The economic growth of Pakistan is already declining; one of the main factors is illegal trading or smuggling. The taxes which are imposed to all the imports are increasing therefore; the smuggling of commodities is at high right now. A local good is twice the price of the same good that has been smuggled. Or if it’s of same price, then the illegally transferred good is more reliable or more durable. All because of these factors the demand of these smuggled products are also very high. A middle class citizen who can’t afford expensive stuff or goods can now buy just about anything because the price of smuggled stuff is half of what it’s actually worth.

Government of Pakistan has introduced policies, rules and regulations to avoid these illegal trades. They have now put extra measures and security to afghan-Pakistan borders where smuggling is mostly done from. Also different check-up points have been made after few miles in highways to check the vehicles in order to avoid terrorism and smuggling in Pakistan. So, Government is taking steps to reduce these illegal trades but their efforts as of now are still in vain.

Smuggling is a very serious matter in the entire world but unfortunately its condition in Pakistan is worse than the most of the countries in the word. Most of the smuggling goods in and out Afghanistan are through Pakistan. The Wagha Border is the main route of transportation of these illegal activities. To make the situation even worse, unfortunately out of 30 routes only 6 of these routes are under control of customs department of borders in Pakistan. The legal goods smuggled through Pakistan in different destinations are worth 2.8 Billion Dollars per year alone. In fact according to the latest reports Pakistan is losing 2.62 Billion worth of revenue per year by the smuggling of just 11 goods. The revenue is lost in the form of duties and taxes on smuggled goods that could be far higher than $2.63 billion or Rs276 billion, if the scope of the study is widened or spread to all the smuggled goods. 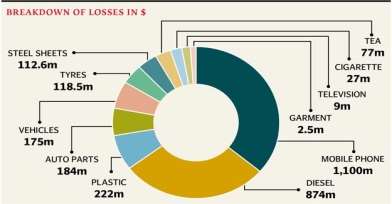 In order to reduce the rate of smuggling government has to take some serious steps as it has a very bad impact in our economy. As a developing country, having smuggling rate as high as in Pakistan means bad news for the future. The goods that our country supply in its market is worth way more than the smuggled goods available in black markets. Even the concept of the black market has been fading in Pakistan because one can find smuggled almost anywhere in Pakistan.

Steps must be taken to reduce this problem. All the NATO vehicles transporting commodities should be checked and approved by the Pakistani concerned authorities, also other vehicles carrying commodities in and out of Pakistan. Pakistani Borders should also be equipped with latest tech to detect any weapons or other illegal items that could be detected.

In this report all the factors regarding smuggling shall be briefly discussed. On the very first section, forms of smuggling and there cautions will defined and apart from that its impacts on the economy of Pakistan shall also be discussed. From the given statistics of the past summaries of smuggling in Pakistan the future outcome and rate can be determined.

Analyzing deportation patterns can be the only means of estimating volume of trafficking in persons and smuggling of migrants. 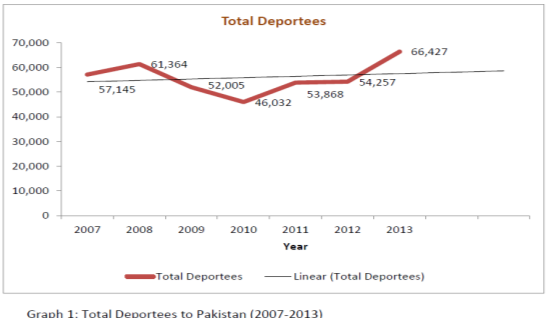 The minimum illegal ecocomy since 2007 can be estimated to be the following:

Overall it can be observed that numbers are increasing as these are based on deportation numbers. 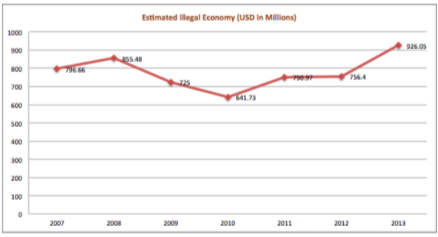 It has been observed that smuggling of migrants involves groups of participant. Each participant involves in an economic exchange.For Pakistan the total sum of services provided are following:

It has been observed by the authorities that if detectors detected smuggled migrants then they punished them for 15 days in jail and a fine of between 200 to 1000 USD (PKR 20000 – 100000). If the detected smuggled migrant shares no specific information about the agent during the legal process he is able to receive 2 more attempts to take the same route without paying any additional fee to the agent. This practice makes the problem to identify the agents supporting the smuggling of migrants.

On Human Trafficking the male to female ratio was 68% and 32% in 2007.By 2010 this has shown a minor increase in female share to 41%. This indicates that the number of female agents or traffickers is increasing in the region. In Pakistan, it is not possible to see any national trend on this phenomenon. The arrest rate nevertheless can be seen to be increasing for the “most wanted traffickers”.